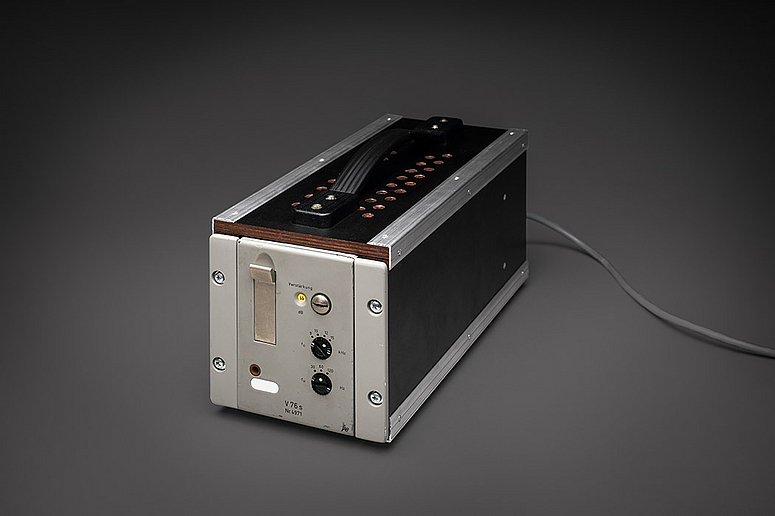 The classic of the West-German studio technology

The V76 was developed by the Institut für Rundfunktechnik (“institute of broadcast technology”) in the late 1950s. It replaced the universal amplifier V72 that had previously been used for amplifying microphones – which obviously was a lot less flexible, with a fixed maximum amplification of 34 dB. The V76 was built by a company called Tonographie Apparatebau (TAB), based in Wuppertal/Germany.
The V76 easily counts as one of the best microphone preamplifiers ever built – its sophisticated circuit design, its unparalleled build quality and the use of component parts of the highest order warrant for some excellent reproduction of sound.

Varieties
There is an entire string of variations that were all aiming at specific applications. The example for rent is the much sought-after TAB V76s variety which was originally used by the Deutsche Grammophon. The more widely used types V76/80 and V76/120 were designed mainly for broadcast use. The V76s, however, was specifically designed for recording studios –  the main difference between the individual models can be found in the more flexible design of the passive filter stage that many recording studios had been demanding for (front view V76s). All other specifications are identical. One crucial aspect of the tonal qualities of the TAB V76 certainly is the very sophisticated input transducer stage which alone boosts the input signal by the factor 30.

How to use it
Since the V76 as the V241 has its roots in the golden age of radio valves, it was consequently designed to be used with valve-based condenser microphones. When using transistorized microphones, there is a risk of the V76 input transducer being damaged (or even destroyed) because of the phantom voltage that is required for the operation of the microphones. The Neumann N452i 48V power-supply helps to solve this issue, and it can be rented along with the V76 at no extra charge – this way, the preamp can be used with transitorized microphone designs like e. g. the Neumann U87, AKG's C414, or the Microtech Gefell M930. When using dynamic microphones, operation poses no hassle.

The example for rent
The example we have for rent was completely refurbished by specialist Eckehard Dux, and its technical specification is excellent, to say the least. The preamplifier was installed into a lunchbox that was equipped with XLR input and output.
The V76 can also be used with line-level signals (synthesizers, electric pianos, drum computers, within a mastering chain etc.) thanks to its custom line-level cable which can be rented at no extra charge.